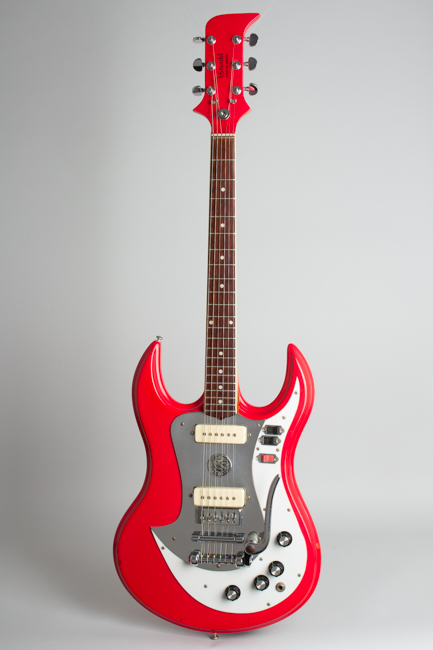 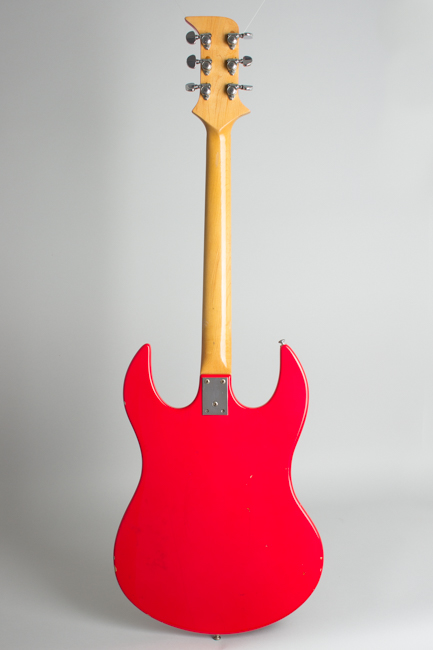 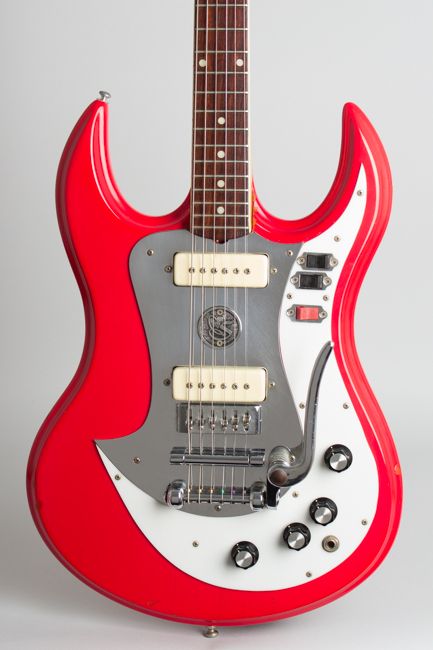 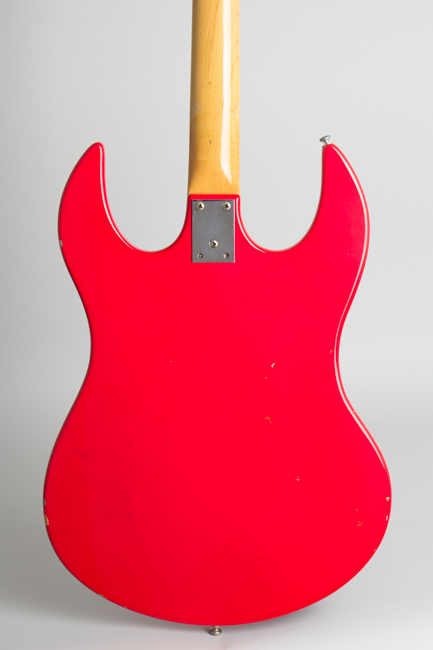 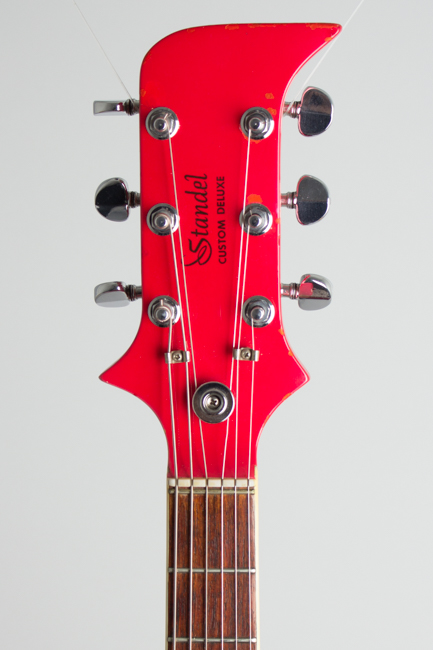 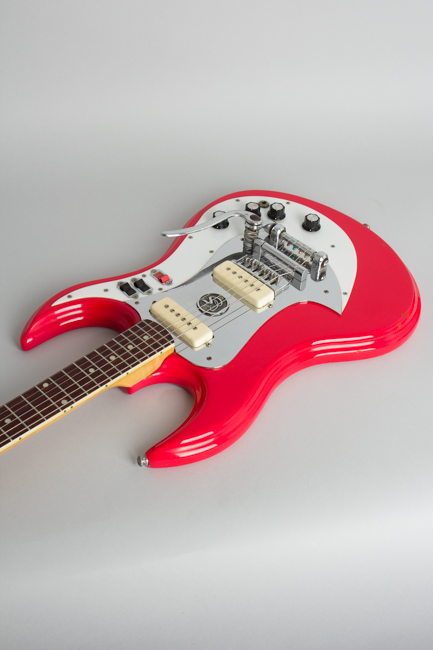 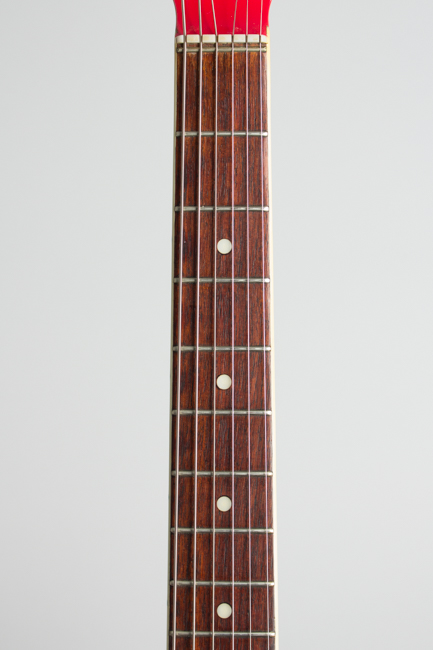 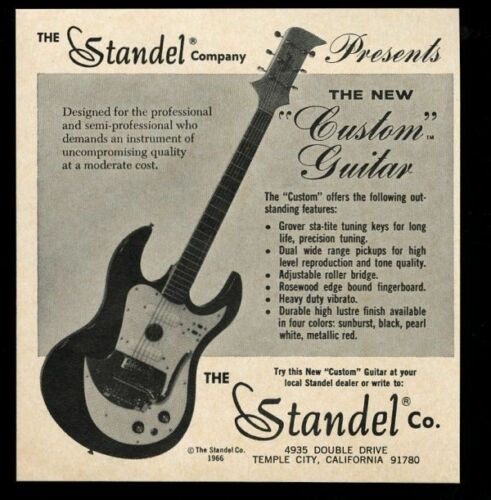 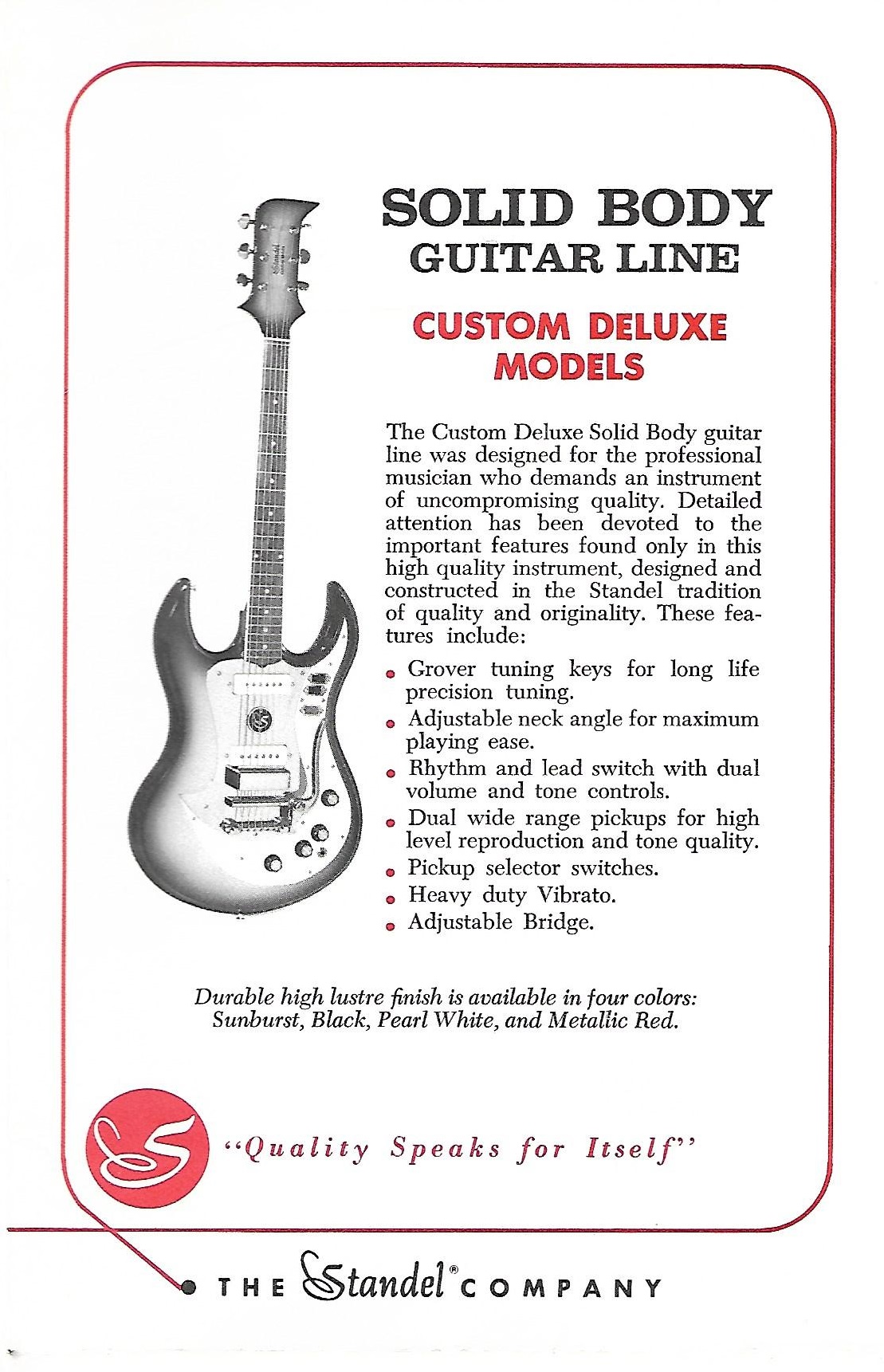 The history of the Standel company is rife with twists and turns, and if they never fully entered the pantheon of great 20th century electric culture icons it is not for lack of honest effort. The best remembered Standel products are the early tube amplifiers of the 1950's and early 1960's; these are still sought after by discerning players today. Like Leo Fender, company founder Bob Crooks was primarily an amplifier man but Standel did make several attempts to enter the guitar market, with commercially mixed results. Still, they are part of the great southern California hot-rod guitar culture.

This Standel Custom Deluxe was part of a line announced in 1965-6 that consisted of "Standard" and "Deluxe" versions of a solidbody and hollowbody design. Standel's amp factory did not actually build them, but they have deep Bakersfield roots. Bob Crooks commissioned Semie Moseley to design a "Fenderlike" guitar several years earlier, but that deal fizzled and the idea emerged as the Mosrite Ventures model instead of under the Standel banner. The most widely credited suspect for building the Custom solidbodies is former Mosrite associate Joe Hall, as similar instruments subsequently appeared under his own Hallmark guitars banner. Another sometimes-mentioned possibility is Bill Gruggett, one of the other Bakersfield guitar building mafia that spiraled around Semie Moseley's notoriously disorganized business.

Whoever actually provided this piece to Standel-we support the Bob Hall attribution-the guitar itself is a real California hot rod, if anything flashier than the Mosrites it resembles. The curvier, sharp-ended body horns, multi-point-laden headstock and swooping dual pickguards combine in a wicked look, like something designed by Ed "Big Daddy" Roth for his creation Rat Fink to play. The guitar has a number of Mosrite/Bakersfield style features, but is far from a simple knock-off. The "German curve" carved edge on the body is a Moseley trademark, and the overall layout of the guitar is similar. The Standel neck is slim and fast, but has more depth than the typical Mosrite and the frets are not as excessively low and flat.

The pickups, bridge and trem system are all solidly mounted on a single metal plate affixed to the face of the body. The vibrato is firmer in operation than Moseley's, helped by an integral tension bar between it and the bridge. The bridge is unique-it has roller saddles adjustable for length, but the height is fixed. To adjust the action, two screws behind the heel adjust the neck angle-an amazingly efficient design far more functional than the subsequent Fender "Micro-tilt". The pickups have "soapbar' coils and adjustable poles similar to Mosrites, but feature a medium-low output, specifically designed to function well with Standel amps. These are controlled by individual on/off switches and a two-circuit tone and volume control system that seems to offer little in distinct sounds but handy in switching from rhythm to lead settings.

The CTS code on the pots in this guitar is 137 6532, dating them to August of 1965. The Standel Custom line was advertised at the end of that year, pictured in a 1966 dated catalog and produced-apparently in very small numbers-into mid '66. they seem to have vanished soon after. The solidbodies are definitely more attractive and functional than the hollow models, and this "Deluxe" model guitar is at least the sonic equal of its Mosrite cousins. The similar but simpler "Standards" are less attractive and have somewhat weaker pickups; this gleaming hot rod Deluxe is definitely the pick of the Standel litter.

In the late 1960's, Standel hooked up with the Harptone company of Newark, New Jersey and commissioned local luthier Sam Koontz to design a line of hollow body instruments and set up the production line. These later Standel guitars were offered in a range of models, but are completely different proposition from this instrument. Those guitars maintain an east coast archtop tradition; this Custom Deluxe is pure California. Standel never really got their guitars off the ground, but we sure are glad they left this devilishly cool gleaming red baby behind.

Overall length is 40 5/8 in. (103.2 cm.), 13 3/4 in. (34.9 cm.) wide at lower bout, and 1 1/4 in. (3.2 cm.) in depth, measured at side of rim. Scale length is 24 in. (610 mm.). Width of nut is 1 5/8 in. (41 mm.). This guitar shows some general wear but remains largely original and in fine playing condition. The somewhat fragile metallic finish shows a number of chips and dings, many of which have been touched up. There are some finish chips to the back of the neck but no large areas of wear, and the overall look is still very sharp. The only alteration to the instrument is there have been several sets of tuning pegs installed over the years; it has now been restored with a set of the original period Grover Rotomatics (WHY did anyone change those to begin with? People usually ADDED the Grovers…??). The headstock shows some old scars from this history, and has several added string trees-which in this case are very useful in improving playability. All other fittings and hardware remain original. The frets show very little wear and this is a very good playing guitar, very fast in the Mosrite tradition, complete in a worn but functional original HSC. Overall Excellent - Condition.
×