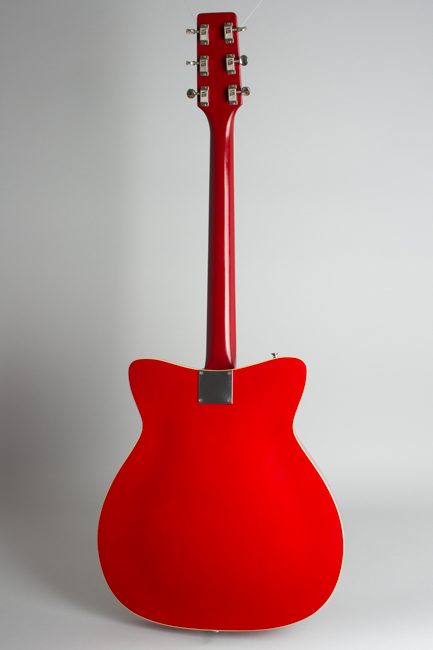 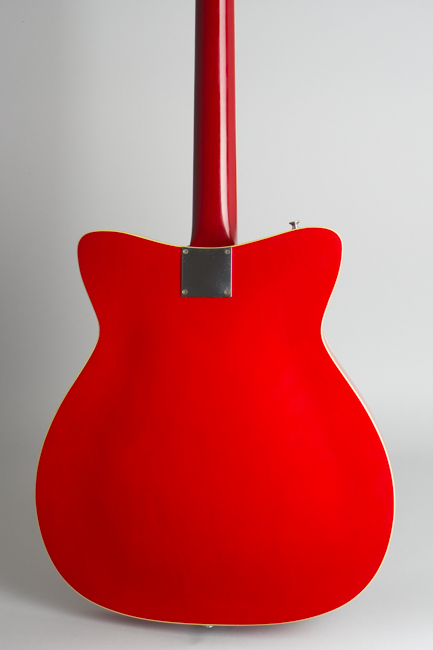 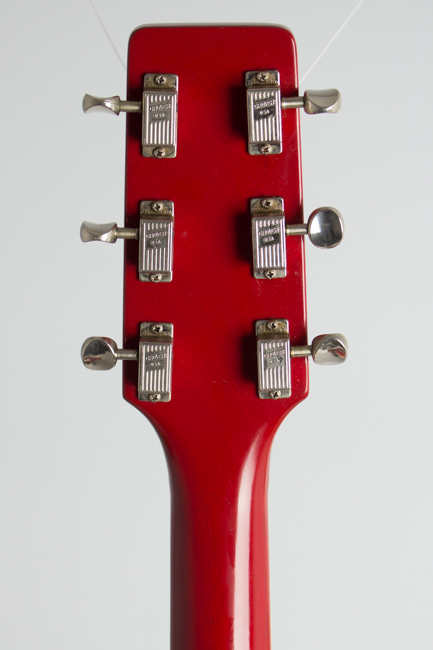 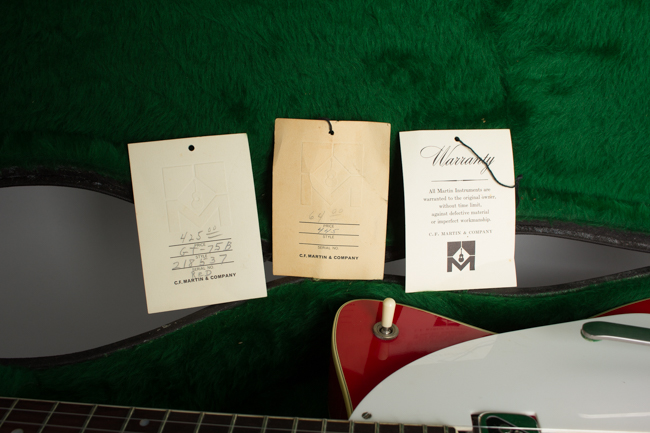 A good contender for the most un-Martin like thing ever to emerge from the company's Nazareth PA factory, This GT-75 is a very late example of Martin's honest but ultimately doomed attempt to compete in the electric market. By 1967 it became evident that Martin was not going to become a big player in the booming electric culture; the next year increasing demand for the company's Dreadnought flattops convinced them to give up the effort altogether. Heck, in 1968 even the Beatles bought themselves D-28's!

That said the GT-75 is actually a very solid and practical guitar, although its looks are unlikely to win any aesthetic awards. This model was the top-of-the (small) Martin electric line in 1966-7, built on a boxy symmetrical double cutaway body that somehow managed to lose whatever grace its short-lived ancestor the F-65 possessed. Still, talk about Martin being bound by tradition? Well they really cut loose here. How about a bolt-on neck, with an adjustable truss rod? To make it downright radical, this GT is finished in bright solid cherry red in place of the gently shaded sunburst of earlier models, topped with a large white pickguard. Shocking!

The pickup rig features two of the tried-and true top-line DeArmond's that were an almost 15 year old design at the time, the wiring also supplied by Rowe, Inc. What did Martin know about wiring anyway? This same setup appeared on all Gretsch electrics until 1958, many Guilds in the early 1960's and other lines in the late '60's including Standel and Kustom. These units give the classic h-fi sound with plenty of snap, and the GT-75 sounds great, albeit in a very 1950's way. The special Martin Bigsby trem unit has a sort of stylized "M" cast into it, and the aluminum Bigsby bridge was another 1950's holdover.

This guitar dated to early 1967, and is likely one of the last GT's made. It has one unusual and somewhat attractive feature we have not seen before. The headstock on the model is usually a rather odd-looking four-cornered spikey affair-this guitar has a somewhat less out there peghead, resembling a klunkier variant of Gibson's "snakehead" style. This headstock appeared on a single 12-string GT prototype, but is unusual on this 6-string model. It is bound, faced in rosewood and equipped with the then-new Grover "Slimline" tuning machines.

While the GT-75 is usually ranked in guitar histories as a failure, taken on its own merits it is actually quite a nice guitar. The build quality overall is typical of Martin, and the mahogany neck is slim and comfortable. The DeArmonds sound as good as they always do, and the bolt-on neck means that any neckset can be done with a screwdriver. Although its looks may be an acquired taste and Martin purists will always scoff, the GT-75 is at least as good an instrument as most of its 1960's competitors and better than many. Only about 750 total were made in four different finishes during its short 2 1/2 year run, and this bright cherry baby with the slimline head is certainly one of the nicest survivors.

Overall length is 41 1/2 in. (105.4 cm.), 16 1/8 in. (41 cm.) wide at lower bout, and 2 in. (5.1 cm.) in depth, measured at side of rim. Scale length is 24 3/4 in. (629 mm.). Width of nut is 1 5/8 in. (41 mm.). This guitar remains all original and superbly clean, showing very few signs of use-it looks like it has been sitting in the case for nearly its entire life. The bright cherry finish has no fade and very little wear, mostly just some scuffing under the bridge. The hardware is all original and complete, with some light corrosion on a few metal parts. We went with the full rockabilly set up on this one with fairly heavy flatwound strings that allow both the Bigsby and DeArmonds to really shine in a period-correct twanging style. The guitar is complete in the original hardshell case with the classy Martin warranty and hand-filled in hangtags ($425 for the guitar and $64 for the case) still inside. Excellent + Condition.
×