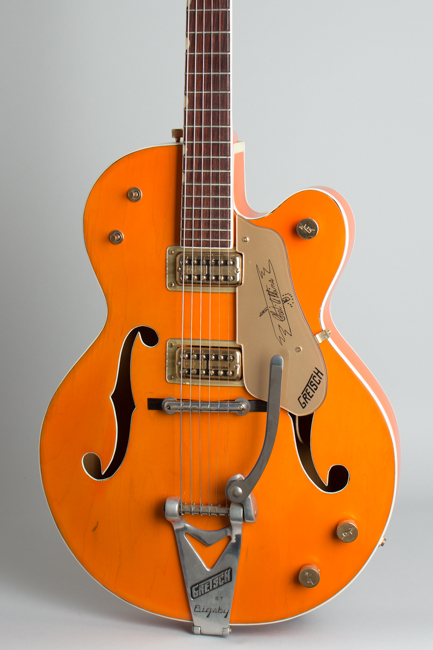 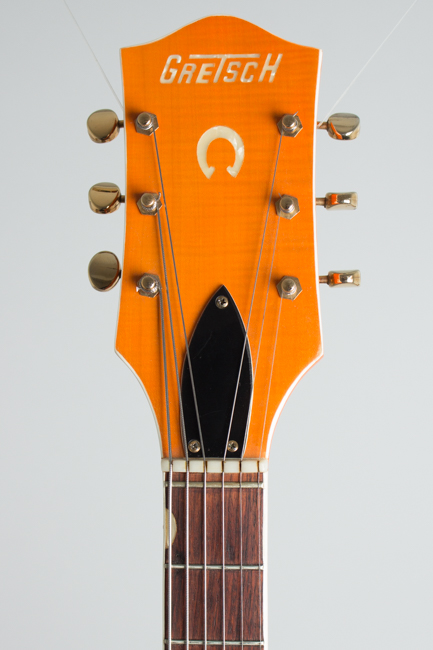 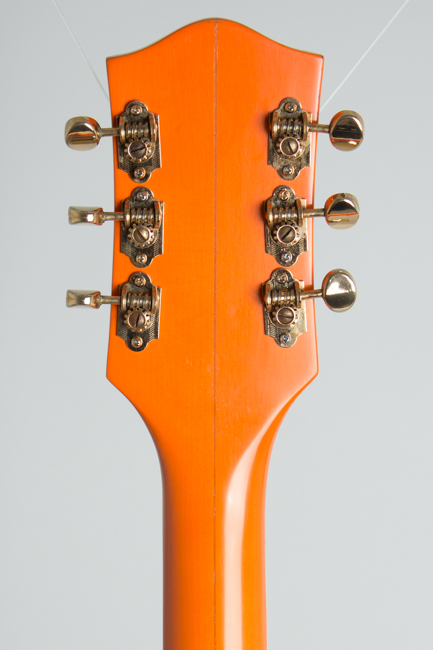 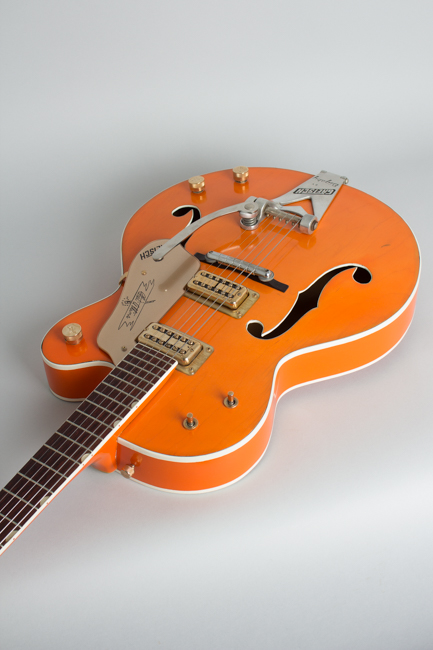 The Model 6120 Chet Atkins hollow body is considered to be the Gretsch company's single most classic creation in its original form. Along with the flashier but extremely rare White Falcon, the "Western Orange" 6120 has embodied the Gretsch aesthetic for decades. Brian Setzer's exclusive use of a 1960 6120 during the Stray Cats' rise to worldwide fame kick-started a sudden market boom for this particular year and model Gretsch in the early 1980s, when Gretsch guitars had previously been pretty much relegated to dusty back rooms. The company had recently ceased building guitars, and in that pre-internet era finding old ones was more difficult. This sudden spike in demand created an avid market for 6120s that was sometimes filled with other instruments altered to the suddenly desirable spec -- and *yes*, this is one of them.

This guitar IS an authentic vintage Brooklyn made Gretsch, just not originally a Model 6120. It almost certainly started life as a 1960s Single Anniversary, with either a sunburst or two-tone green finish. This guitar was the same size and shape as the Atkins hollow body with some different hardware and cosmetics. It has been refinished in orange, with double binding added to the body edges and f-holes; the Anniversary had a single-bound body and unbound sound holes. The binding work is solid but a bit sloppy in places. The finish color is somewhat more of a "bright Tropicana" shade than most original period Gretsch models, although not garishly so. The original Anniversary body is fully hollow, and not "trestle"-braced as the 1960 6120 was.

The hardware is for the most part authentic period Gretsch; the two pickups are the classic Filter 'Tron units used in top-line models after 1957. Both appear to be of correct 1960s vintage (they were hardly changed at all during that decade), but the covers and poles have been gold-plated later. The Bigsby Tailpiece and solid rocking bar bridge are also correct period pieces -- the bridge has been slimmed a bit from below, but performs as expected. The Waverly tuners are original period as well -- these may well be the original set from the "donor" Anniversary model re-plated gold. The knobs and strap buttons are the correct style, but the "G" knobs are slightly later manufacture; several dealers in the 1980s, including Gretsch stalwart "Duke" Kramer, were re-manufacturing and selling such parts in this era when the Gretsch company was out of the guitar business. The Chet Atkins logo pickguard is likely from that source as well.

The serial number stamped on top of the headstock has been added later; it is quite possibly the original serial number for this guitar, but as the label is missing from inside the body, that is impossible to verify. It indicates a build date of 1961, which is also vaguely accurate for a late single-cutaway 6120, although that model had a slightly slimmer 2 1/4" body by that time. The headstock overlay looks like NOS leftover stock from the Boonville, Arkansas Gretsch factory that closed in 1981...there were a lot of those floating around at the time.

While this guitar is not a bonafide 1961 Model 6120, it is still a genuine US-made guitar with the 1960s Gretsch vibe. It is also a souvenir of the wild and wooly 1980s when the world of "vintage" guitars had precious little reference available and fewer rules. A sheep in wolf's clothing perhaps, but a cool old Gretsch nonetheless that plays and sounds the way it should. The neck feels great -- actually a bit beefier than many 1961 6120s -- and the original Filter'trons and Bigsby twang as expected. From the Stray Cats, to Neil Young's Buffalo Springfield era and early solo recordings, to Pete Townshend's work on WHO'S NEXT, the 6120 is an enduring example of "that great Gretsch sound". In these days of endless re-boots, reissues, and relics, here’s an authentic-sounding piece of inauthenticity, a reminder of a time when six-string dreams and desires needed more than a few clicks of the mouse to satisfy them.

This guitar presents as a fairly new instrument, with very little wear or even signs of use since the major re-working many years ago. There are some minor scuff and scratches, mostly near the bridge base, but no really notable wear. There are a few old wear marks UNDER the finish. The frets are small vintage-style wire and show minimal wear as well. The guitar is a very decent player and certainly has the sound and vibe of a period 6120 without the much heftier price tag. It resides in a very nice more recent re-issue Gretsch White Cowboy case. Excellent Condition.
×