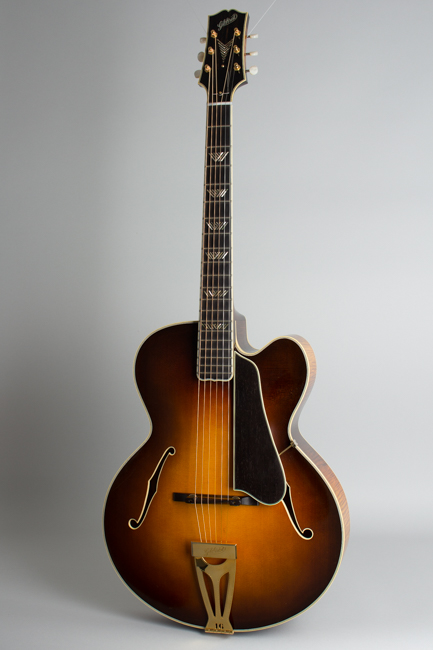 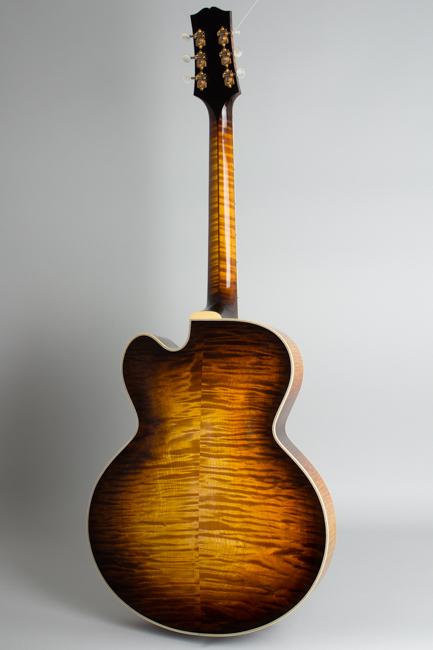 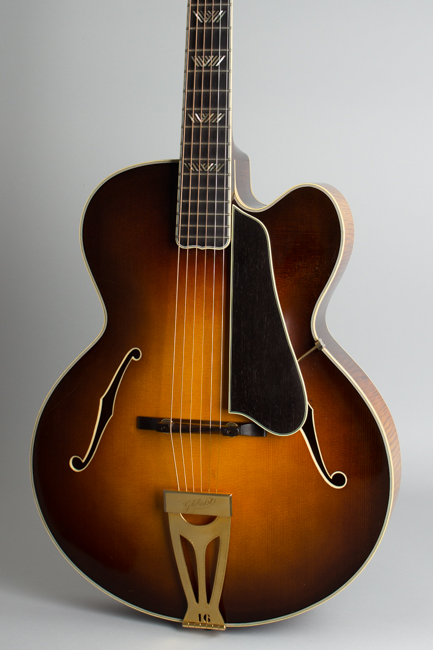 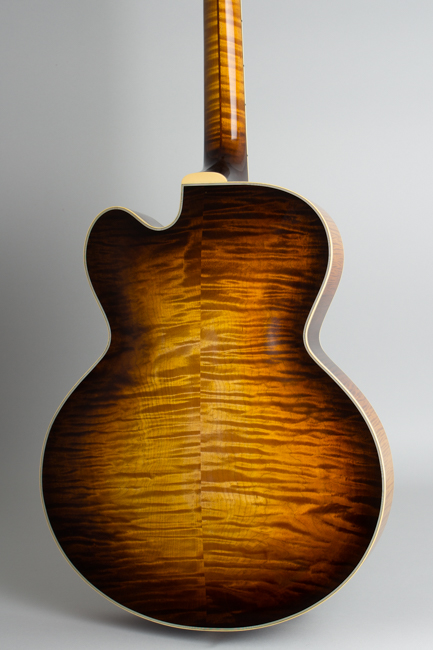 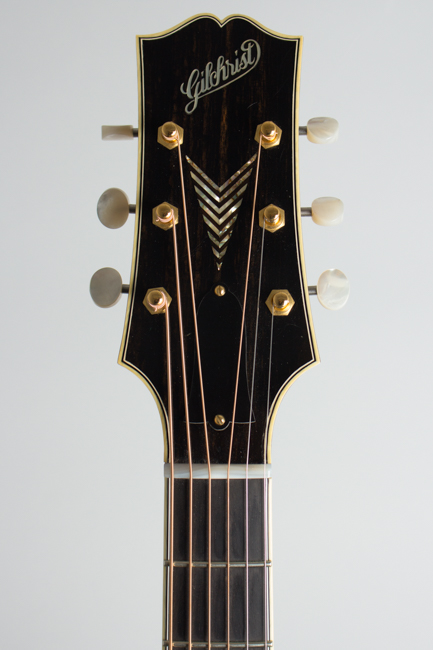 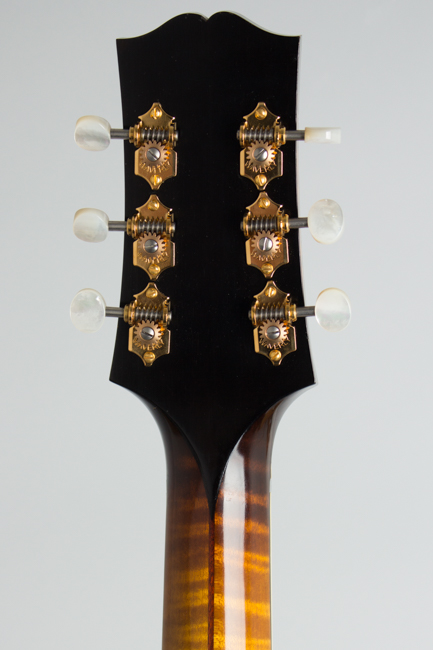 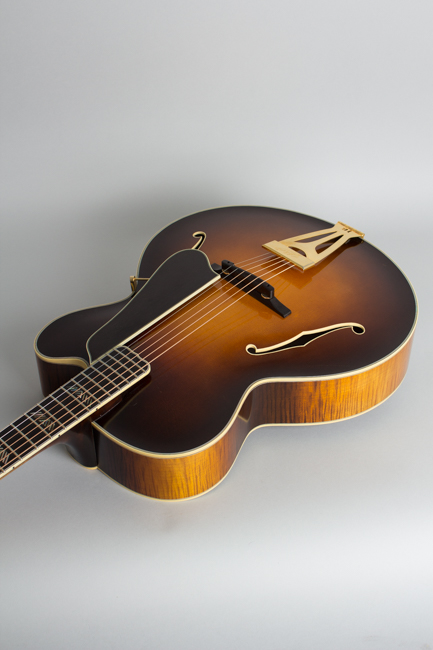 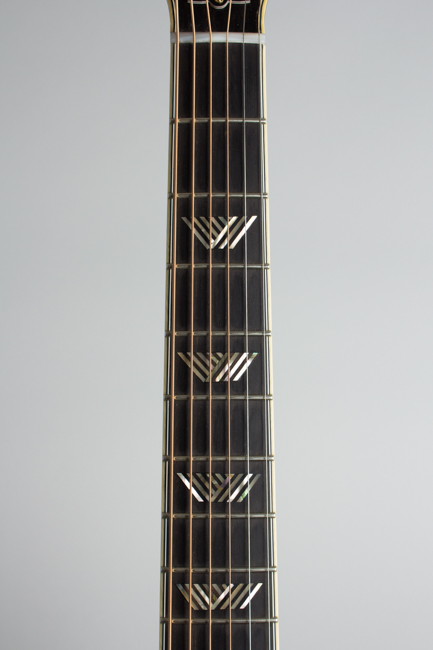 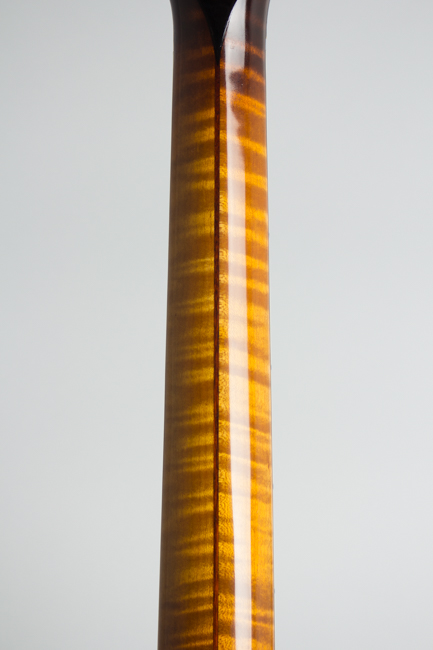 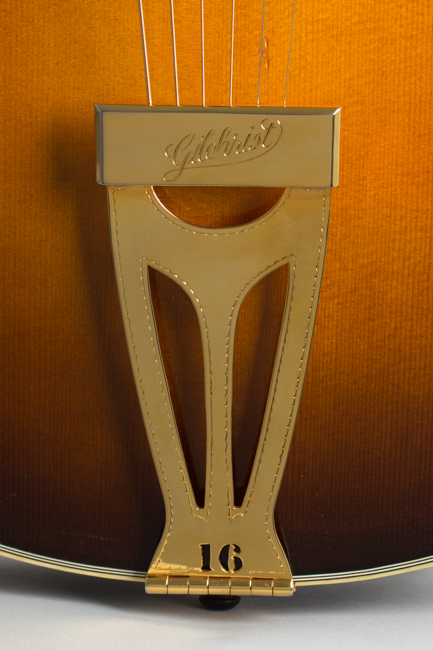 Steven Gilchrist is widely considered the finest builder of traditionally-styled mandolins in the world, and his instruments are widely sought after by the most discerning players. This is a rare and absolutely superb sounding 16” archtop guitar handmade by him in 1994, one of only 50 to 60 guitars he has produced. Many players have said Gilchrist's guitars are among the best that they've ever played, and on the basis of this one we would have to agree.

The guitar is generally based on the original 16" wide 1920's Gibson L-5, but has many refinements. The most obvious are the cutaway body and an X-braced top, features Gibson only ever used on later 17" Advanced L-5 models. It also has bound f-holes, and multiple bindings on the headstock, fingerboard, top, and back. The finish is a beautiful hand-applied varnish finish with the 1920s-style Cremona Sunburst. The headstock and fingerboard have Gilchrist's unique signature chevron mother of pearl inlay; he is no longer offering this chevron inlay as an option on newly-ordered guitars.

Appointments include all gold plated hardware, including an engraved tailpiece reminiscent of some pre-War styles but still unique to Gilchrist. A lovely feature inherited from the first 1920's L-5's is the pearl nut, and mother of pearl buttons on the Waverly tuners. The elegant headstock is a slightly modernized version of Loar's original "snakehead' and maintains a timeless grace. The sleek elevated pickguard is pinned to the fingerboard edge and made of wood triple bound with celluloid-even the securing clamp is Gilchrist's own design.

The design and craftsmanship on this guitar are exemplary, but the real delight is in the sound. The dynamic range is greater than most other archtops. It has a full, rich, woody tone with excellent note separation -- strong note fundamentals, clear trebles, powerful mids and deep bass evenly balanced across all the strings and along the length of the fingerboard.
This exceptional guitar has now aged nearly 25 years and is reaching the peak of its development. In our humble opinion this guitar stands alone as a uniquely fine modern refinement of traditional pre-war archtop instruments. It includes a second pickguard with a floating Bartolini pickup and may be quickly converted for amplified use as well without affecting the acoustic qualities.

Overall length is 41 1/2 in. (105.4 cm.), 16 3/16 in. (41.1 cm.) wide at lower bout, and 3 5/16 in. (8.4 cm.) in depth, measured at side of rim. Scale length is 24 7/8 in. (632 mm.). Width of nut is 1 11/16 in. (43 mm.). This guitar shows some very light play wear and a few random dings but considering the relative fragility of the thin varnish finish and the age of the instrument, it is still in extremely fine condition. It has been set up with fretwork and a newer bridge (a replica of an original D'Angelico piece) by New York master luthier Norio Imai and is an extremely fine playing instrument. The original Gilchrist bridge (that is an unusual design with a hollowed out base) is included. A strap button was added to the heel that has since been removed.

This is a truly exceptional modern archtop guitar, exquisitely built in the traditions of older pre-war instruments with tonal excellence as the prime consideration. The guitar has been played in but extremely well cared for; it resides in the original hard case with some Gilchrist paperwork. This particular guitar is also featured in Gilchrist's catalog from the 90's, and remains a spectacular example of his work. Excellent + Condition.
×