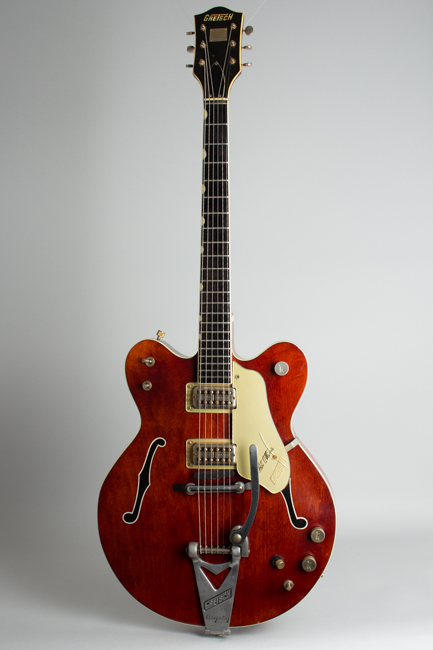 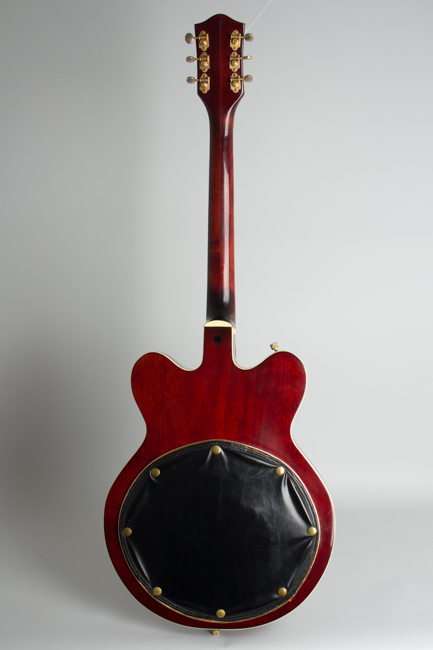 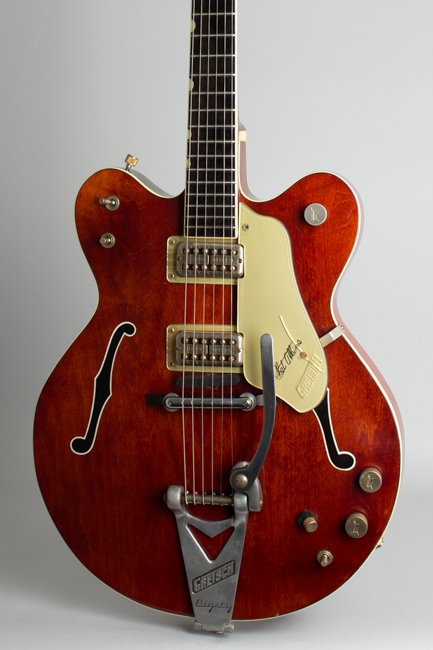 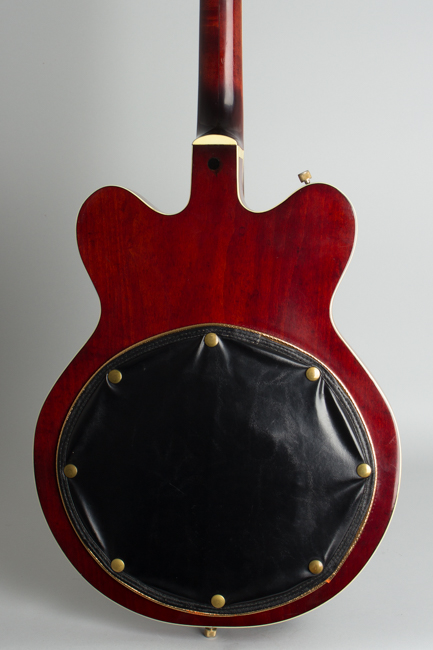 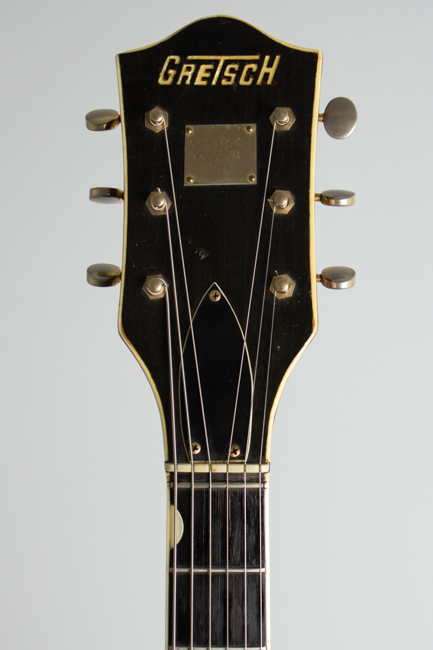 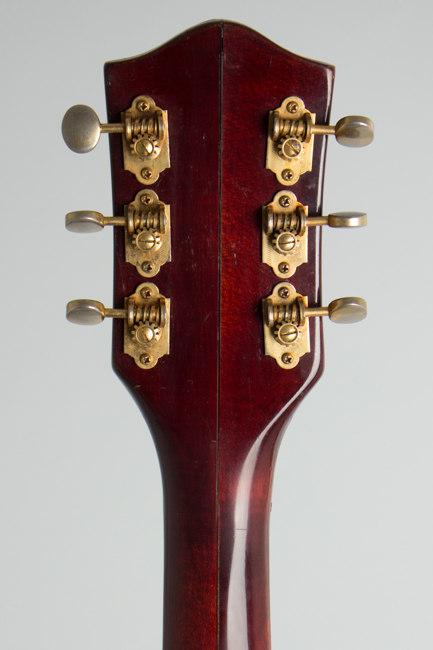 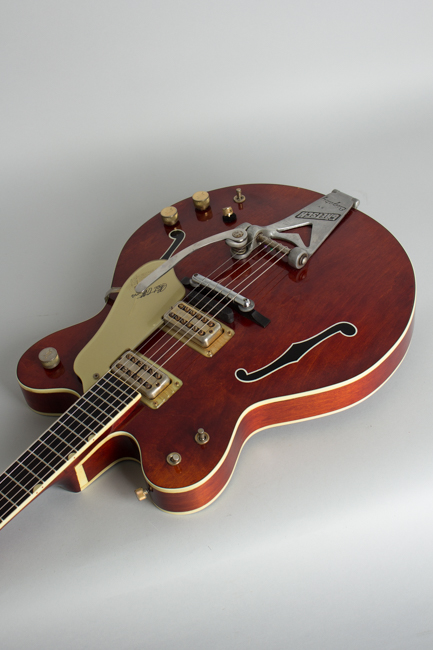 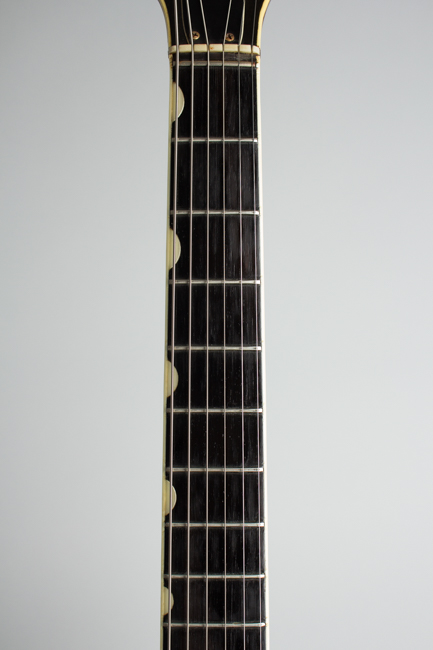 This is a very rare and unusual example of a double cutaway Chet Atkins Model 6120 Nashville from 1965. This guitar is the same as the standard catalog model except for one custom feature-it is finished in the same deep medium brown as the contemporary Chet Atkins Tennessean and Country Gentleman models instead of the standard "Western Orange". This is a very rare variation-we have seen a couple of others over the years-and would have only been the result of a special order with a Gretsch dealer. While the bright orange finish is the classic hallmark of the 6120, even at the time some more conservative players found it garish and preferred the darker hue-Chet Atkins himself was one of them! Whoever ordered this one wanted the more subtle look of the Country Gentleman on the smaller body of the 6120, retaining all the model's other features.

This "Chet Atkins Nashville" was the 1960's modernization of the iconic 1950's-style 6120 with a single cutaway, open-F hole body. That version was retired after a seven year run at the end of 1961 in favor of this new design, more in keeping with the "modern" '60's Gretsch aesthetic. The new 6120 was still fully hollow but thinner at the rim- only 2" deep with the "F-holes" simulated by decals and a symmetrical double cutaway. The finish usually remained the trademark vibrant orange-this custom example is one of the few known to exist with an alternate finish.

The electronics rig features two Filter 'Tron pickups and a 3-knob, 3 switch control layout -- unaltered from earlier models save for the addition of the "standby" cutoff switch on the lower treble bout. The Atkins-specified Bigsby vibrato unit and metal bar bridge were also retained. Another newer addition was a mechanical mute assembly; the lever action "Muffler" seen on many '60's Gretsch models was never a popular feature with players and many have been discarded-this one is still intact and working, with a recent re-foam. This mechanism required an access hatch cut in the back, conveniently covered by a gold-trimmed black vinyl pad that was described as a comfort-enhancing feature.

Despite all the changes model remained a very popular instrument among professional users in the 1960's despite a fairly high price tag. Although not usually remembered as an iconic "Beatle" guitar all the Gretsch Atkins models benefited greatly from the brand's association with the group, and John Lennon did in fact play a 6120 at least briefly in the recording studio in 1966. Many other 1960's bands featured the instrument in both the US and the UK, and the 6120 remains a prime "beat group" instrument, as well as a perfect vehicle for the sort of fingerstyle playing its namesake Chet Atkins specialized in. This custom-ordered guitar is one of most interesting double-cut 6120's we have seen in some time, a nearly unique find and a really good sounding and playing 60's Gretsch to boot.

Overall length is 42 in. (106.7 cm.), 15 3/4 in. (40 cm.) wide at lower bout, and 2 in. (5.1 cm.) in depth, measured at side of rim. Scale length is 24 1/2 in. (622 mm.). Width of nut is 1 11/16 in. (43 mm.). This guitar is quite clean, showing only some typical light wear to the finish with a few dings and some loss to the gold plating. It appears all original except for some darker overspray in the heel area related to a previous neck re-set. The neck angle is quite good and playability is excellent, unlike many from this period. The original frets show only light marks in the lower positions. The laminate seam on the back of the neck has been re-sealed, and there is one crack in the Lucite pickguard off the lower mounting screw.

Amazingly for a Gretsch of this era the binding shows no signs of deterioration at all except for a few tiny check lines in the piece on the treble side of the heel. This very rare guitar is not only one of the most unusual 6120's we have seen, but one of the best playing and sounding we have had. As icing on the cake, it is housed in one of the last "black bordered" style white-tolex cowboy cases, hardly ever seen in 1965 although still listed as a catalog item. We don't know who went to their dealer and ordered this 6120 originally, but they got one heck of a nice Gretsch for their trouble! Excellent Condition.
×