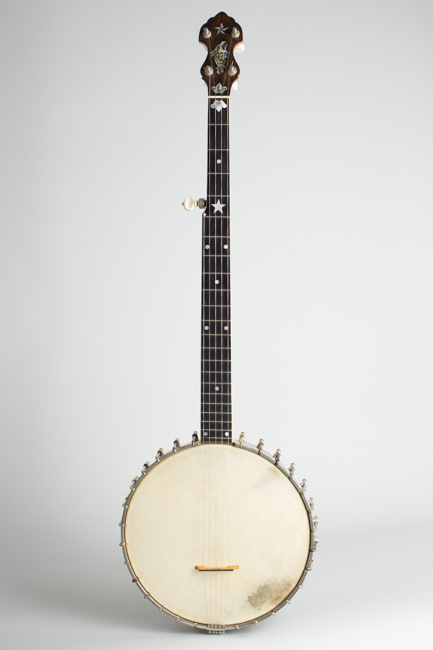 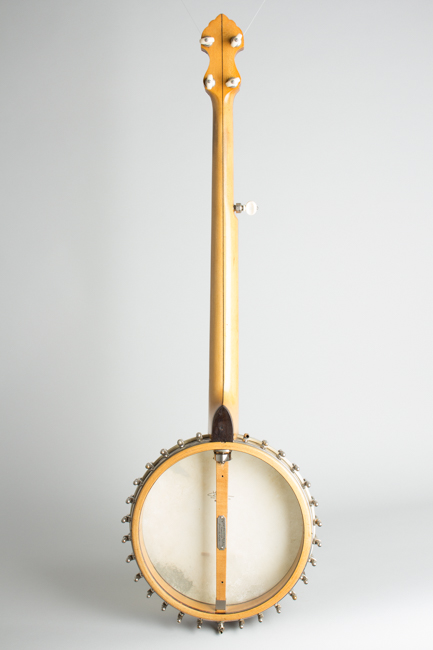 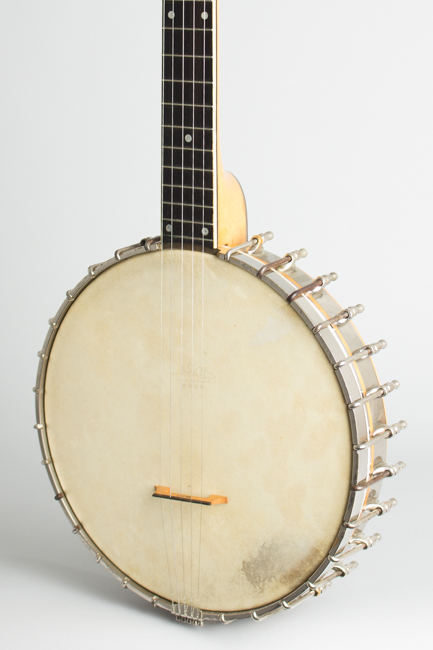 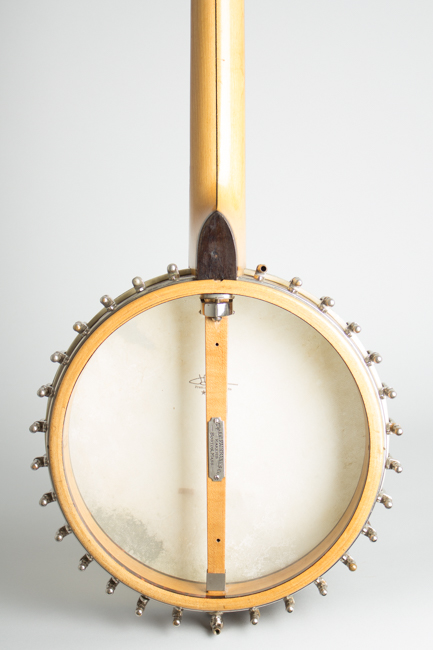 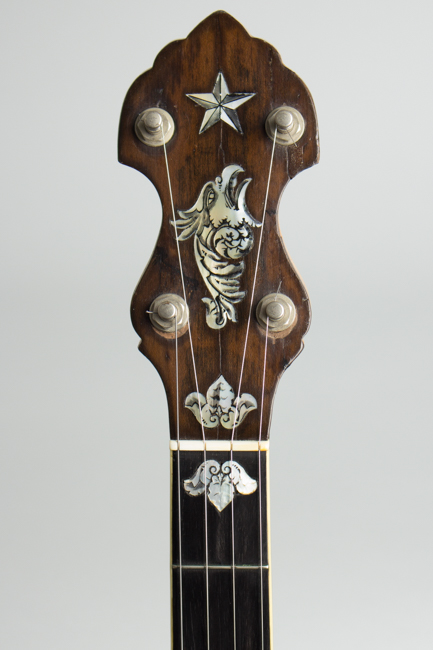 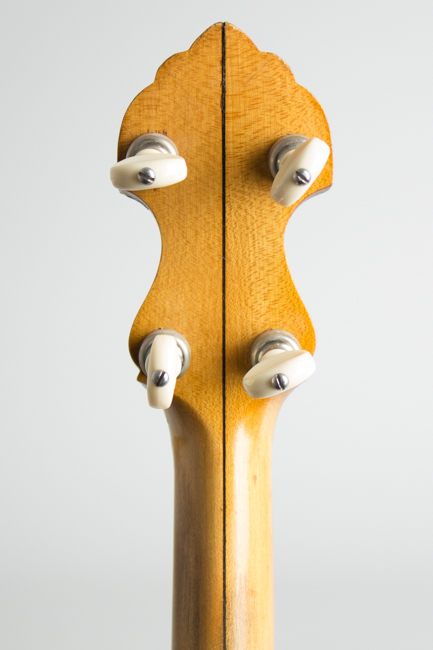 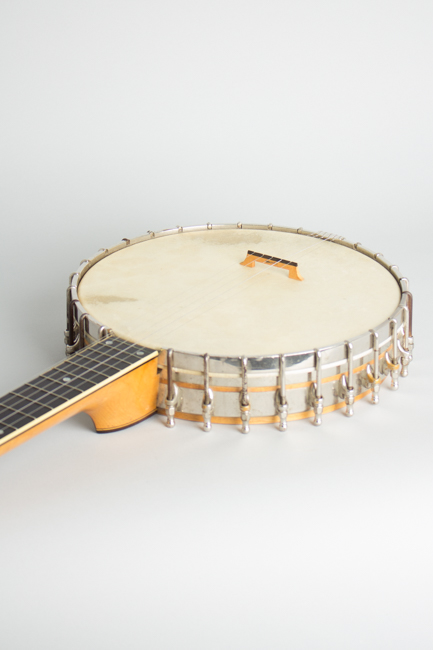 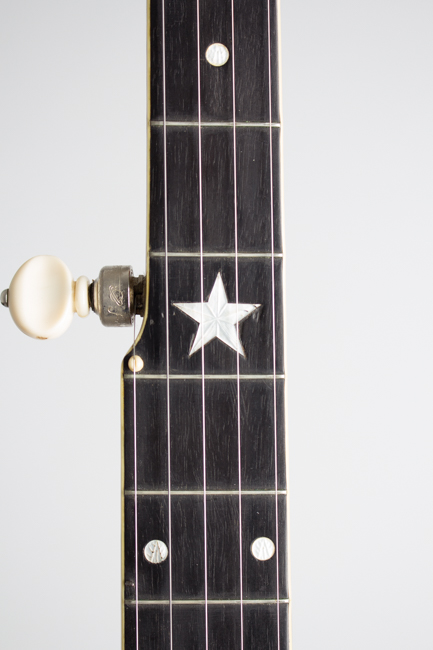 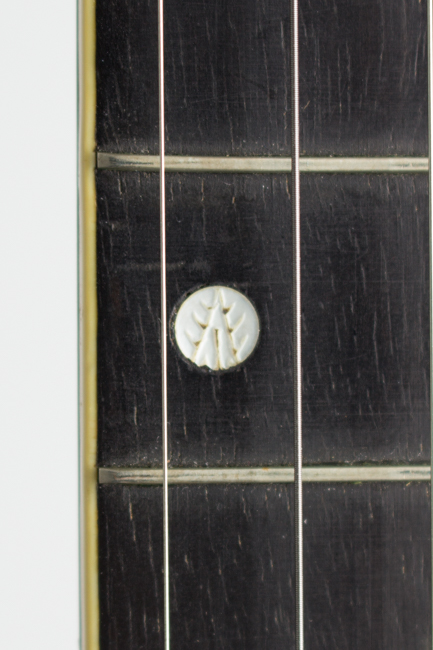 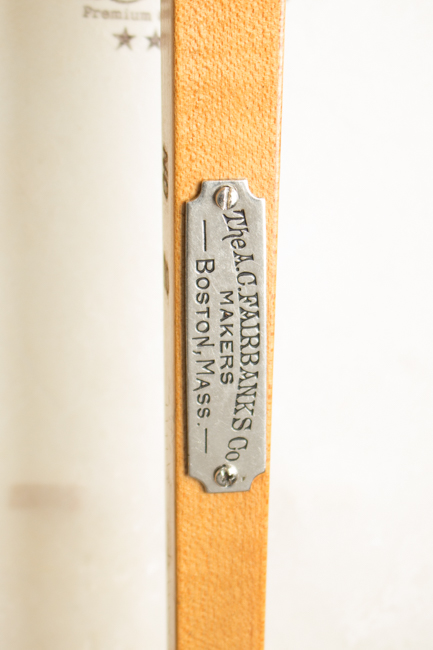 This banjo is a splendid example of one of the world's standard openback 5-string-the Fairbanks/Vega Whyte Laydie #2. It was built in 1909, 5 years after the Fairbanks company had been bought out by Vega and just as the higher grade Tu-Ba-Phone banjos were being introduced. The #2 was not the fanciest grade Whyte Laydie, but was still an elaborate creation and structurally and tonally one of the finest banjos in the world.

This banjo has a 10 3/4" maple rim and 27" scale laminated maple neck, the standard size for a #2 (several options were available). This configuration is the absolutely classic old-time 5-string banjo and produces a sound that few others, new or old, can match. The Fairbanks "Electric" tone ring is fitted over the bracket-band rim, another patented Fairbanks feature. It is a lovely banjo, fairly fancy to look at but not as opulent as some higher end gilded age models.

There is an engraved pearl star on the headstock above the famous "Gryphon" inlay, a trademark that has been often imitated since. This one is particularly boldly engraved and looks fantastic. The bound fingerboard is genuine ebony (some are dyed maple) has a single shaped pearl floral inlay by the nut, with a star at the 5th fret and dots elsewhere.

As with all Fairbanks instruments, everything on this banjo is to the highest quality standards By this time this Whyte Laydie was made the company's exceptional 5-strings were the undisputed standard of the world, which they remain today. Often imitated in the decades since, the Fairbanks/Vega Whyte Laydie is one of those vintage instruments that instantly justifies its stellar reputation, remaining one of the finest of "old school" banjos ever made.

Overall length is 37 in. (94 cm.), 10 7/8 in. (27.6 cm.) diameter head, and 2 1/2 in. (6.4 cm.) in depth, measured at side of rim. Scale length is 27 in. (686 mm.). Width of nut is 1 1/4 in. (32 mm.).
This banjo remains in very nice condition overall, with some general wear and some predictable modern parts substitutions. The finish has some wear overall, there is a scrape on the heelcap and some wear to the wood on the back of the neck. There are several small holes drilled on the underside of the rim, likely the residual scars of either a resonator or mute installation; two are in the dowel, one goes through each side of the rim and a slight scoop has been made on the outside rim by the heelcap. These are inconsequential structurally but could be filled if desired.

The plating shows some wear, with some hooks more corroded than others. The hooks are mostly original but not a perfectly matched set with a few in the "similar but not exact" match category. There is some rather inexplicable denting to the top edge of the rim, mostly on the treble side. This is not overly conspicuous but visible enough. The rest of the hardware appears original and in good condition except the obvious exception of the tuners, a full set of later (c.1970's) Planet brand geared tuners. Nearly all of these banjos that have been played over the last 60 years end up with geared tuners-few modern players have the patience to use steel strings with the original 1/1 straight-shaft friction pegs. It is set up with an excellent modern pre-stretched skin head and makes for an excellent sounding and playing old-time banjo. Excellent - Condition.
×