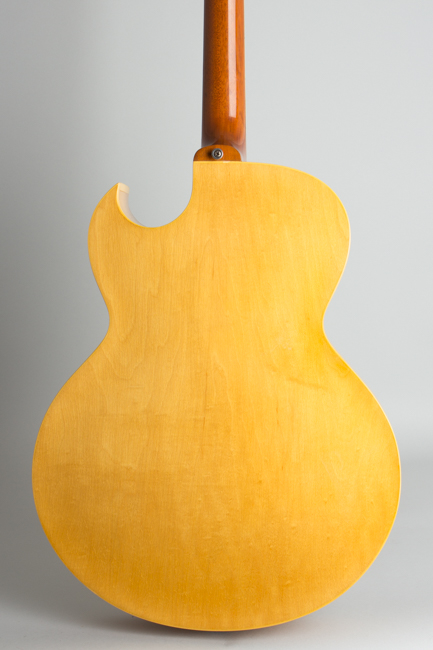 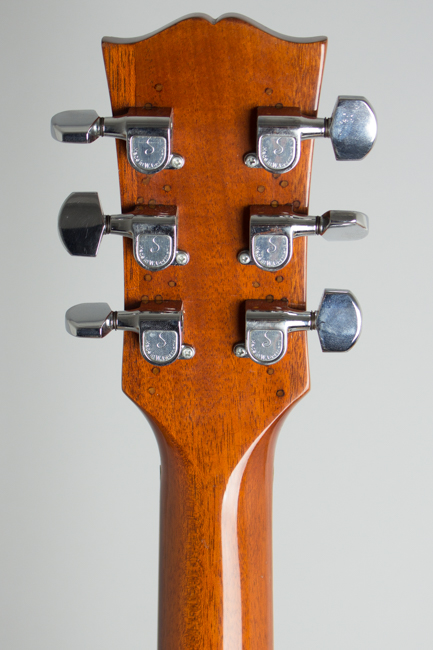 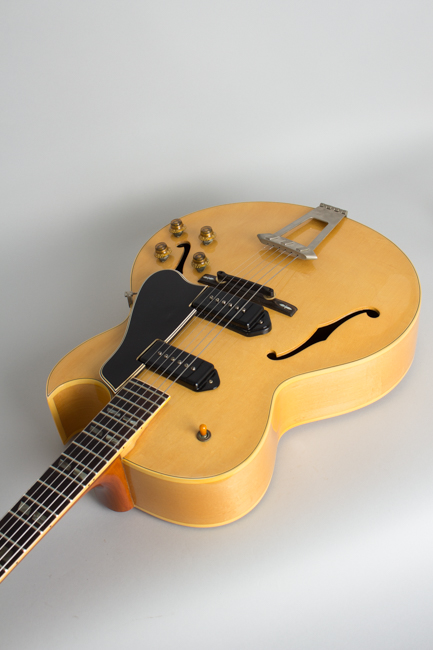 This is a fine player's example of a mid-1950s ES-175DN, the natural-finish version of Gibson's classic "Working Man's" jazz guitar. This particular instrument was built when the 175 was already a very successful design, having found immediate acceptance among professionals and amateurs alike for its combination of great sound and playability at a relatively moderate price. This guitar has been cleanly reworked some time ago and has an oversprayed finish and some hardware substitutions but remains an excellent playing and sounding instrument.

The Es-175 debuted in 1949 as a single-pickup guitar; the ES-175D had been added to the line in 1953 with a second pickup at the bridge adding a lot of tonal versatility. Many jazz players still continued to prefer the original version with the neck PU alone, but blues and rock and roll players appreciated the extra twang potential of the bridge pickup. The other features of both models were the same, the "D" just adding the second pickup, two more knobs and selector switch to the mix.

The natural-finished laminated maple body is triple-bound on the front and single-bound on the back; the neck is single-bound with split parallelogram fingerboard inlays. The headstock carries the pearl Gibson logo and crown inlay. The original hardware includes double P-90 pickups with black plastic "dogear" covers, a 5-ply beveled-edge pickguard, earlier L-7 style tailpiece, and tone and volume controls with amber plastic numbered knobs.

The orange Gibson label bears an "Artist" serial number dating to June 1956, and the coded factory order number V4941-22 reflects the same period. This era's ES-175 has been used by far too many jazz guitar greats to count; the double-pickup examples like this one are also great early rock and roll, rockabilly, and R&B guitars.

This ES-175 shows some typical renovation working guitars were often subjected to before they were considered "collectible" but remains a fine instrument. There is a fairly heavy older clear overspray on the neck and headstock, and a lighter one on the body. The original Gibson lacquer is still present under this overcoat, and although the guitar is somewhat shiner than it would have been, the overall effect is not too far from the original look. There are filled holes from different tuners and a strap button on the side of the heel under this overcoat.

The guitar retains much of its original hardware including the all-important 1950s P-90 pickups; also original are the knobs, nickel tailpiece, amber switch tip, and celluloid pickguard. It is fitted with chrome Schaller tuners from the 1980s mounted and shows the signs of several other previous tuner installations. It has a later style Gibson bridge with pearl insets in the wings. The frets are larger than the originals but quite playable, not the massive "flat crown" metalhead 1980s style we sometimes still find on older Gibsons. This is still an excellent gigging 175, not to precious to take out but a fine performance guitar nonetheless. It includes a good modern HSC. Excellent - Condition.
×