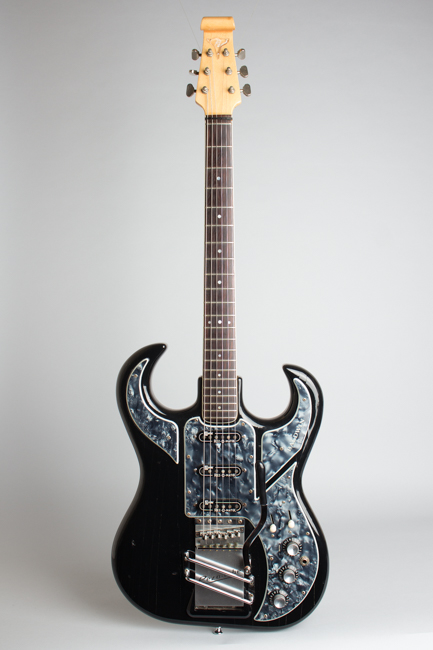 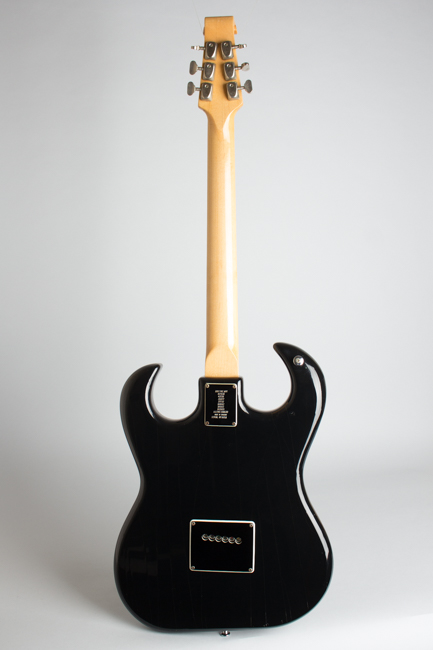 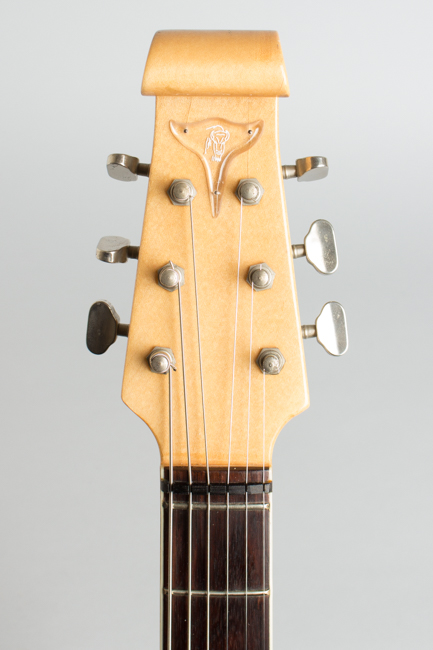 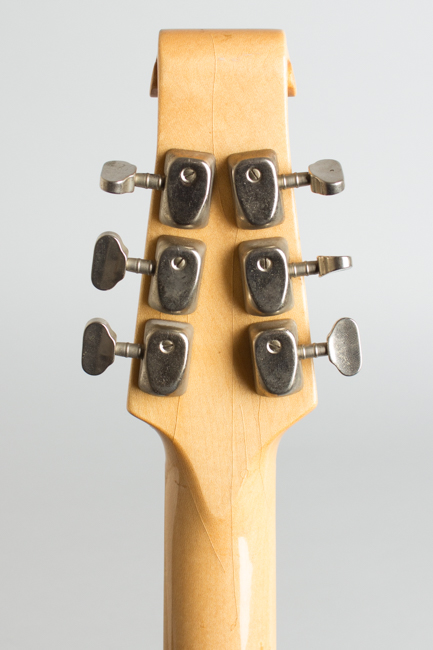 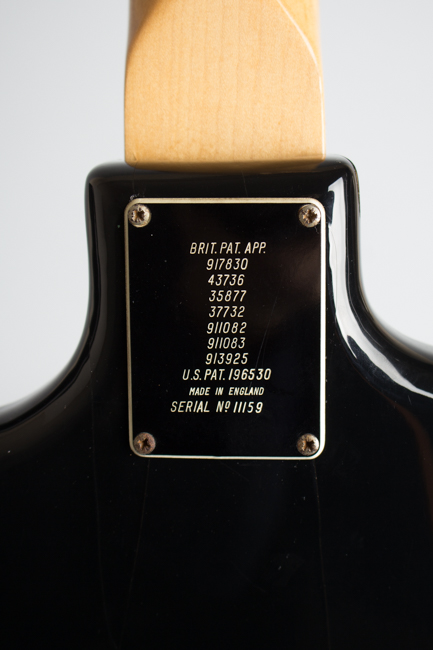 This late 1965 Baldwin-branded guitar is a supremely striking creation (visually, at least) and represents a fairly late stage in the evolution of the Burns Bison, one of the most fantastically eccentric of 1960s English guitars. The original 1962 Burns Bison was a 4-pickup, gold-plated, set neck marvel, a handmade playable sculpture too complex for factory production.

A simplified bolt-on neck model with three pickups followed, and was produced in fairly small numbers up through mid-1964. In the fall of that year, the Bison was thoroughly redesigned to share many of the design features of the new Burns Hank Marvin signature model including a carved scroll headstock, three Strat-inspired Rez-O-Matic pickups, a three-piece segmented pickguard, and the elaborate Rez-O-Tube vibrato unit designed specifically for the Shadows' guitarist.

While this shared layout robbed the Bison of some of its unique charm, it did not diminish the guitar's very eccentric visual appeal -- the flashy carved body with the unique forward-curving horns remained as unmistakable as ever. The grey tortoise pattern celluloid pickguards on the black-finished body are a unique touch, and the whole guitar has a sort of retro space age character. The clear plastic headstock badge features the enigmatic etched bison head cartoon peering out as the only model identifier.

This one has pickguard inspection sticker dated to August 1965, showing it was wired up just before the Baldwin takeover in September of that year. Within months of this guitar being assembled, the deep Hank Marvin-designed scroll headstock was simplified to a flatter and less visually striking shape for ease of production, making this guitar a fairly rare transition variation.

Besides its visual appeal, the Bison guitar is a great sounding instrument with a very strong "Stratty" character from its three Fender-inspired Rez-O-Matic pickups. Although carrying the same pickup and knob rig, it actually offers a much wider tonal range than the Marvin thanks to the addition of a second selector switch. This multiple switching facility accesses a range of extra pickup combinations, including extreme "wild dog"-like out-of-phase combinations. All Burns and Baldwin Bisons are quite rare, especially in the US, and are both visually and sonically very impressive guitars. This is an extremely nice example of the earliest Baldwin-branded Bison guitar, one of our favorite fretted oddities of the 1960s.

This guitar is all original and quite clean overall with only some small finish dings, checks, and scuffing. The polyester finish is intact with only some moderate finish checking, mostly long lines on the body -- noticeable, but not severe compared to what many period Baldwin instruments show. This instrument itself shows no repairs or alterations. The oft-missing vibrato arm is present including even the correct washers on the mounting shaft, and the Rez-O-Tube unit is working as it should. This is a complete, ready-to-go, excellent playing guitar, still housed in the original Baldwin-badged HSC. Excellent Condition.
×