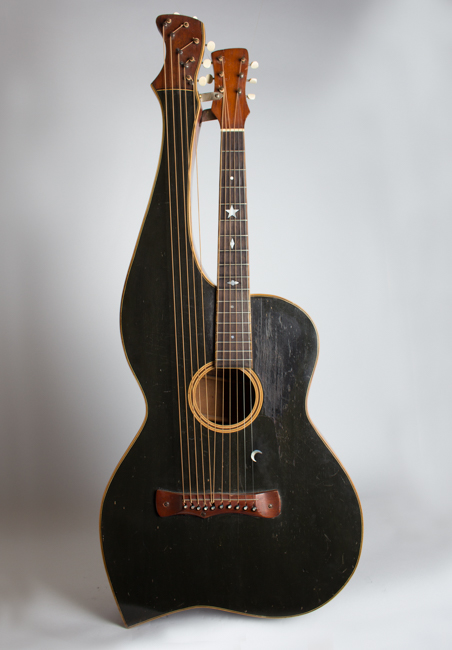 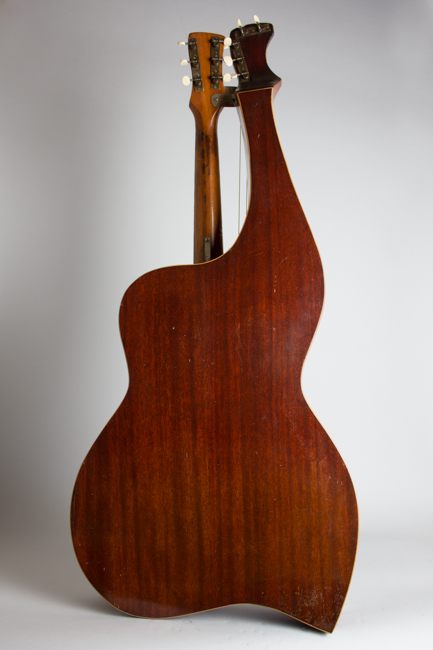 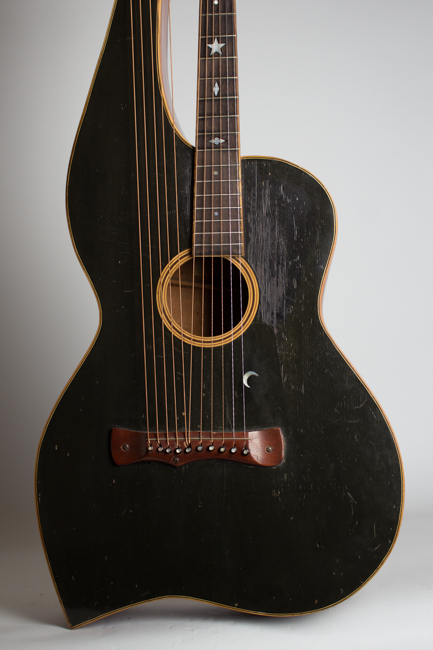 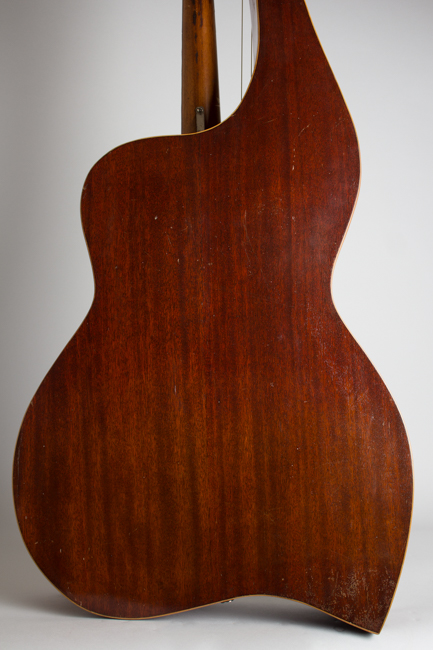 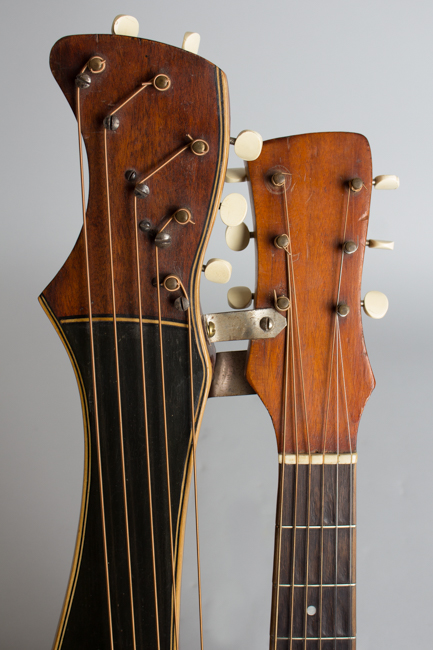 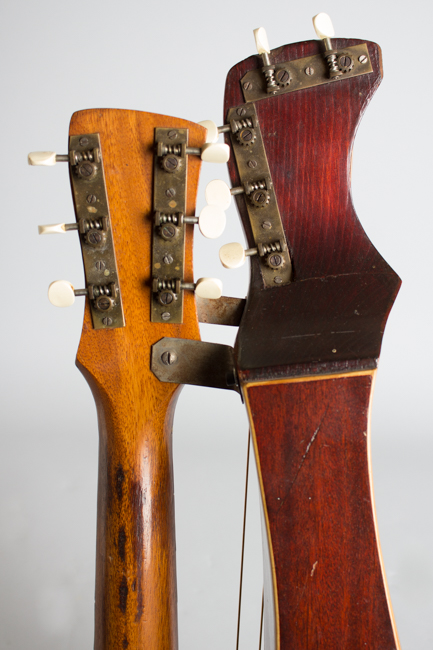 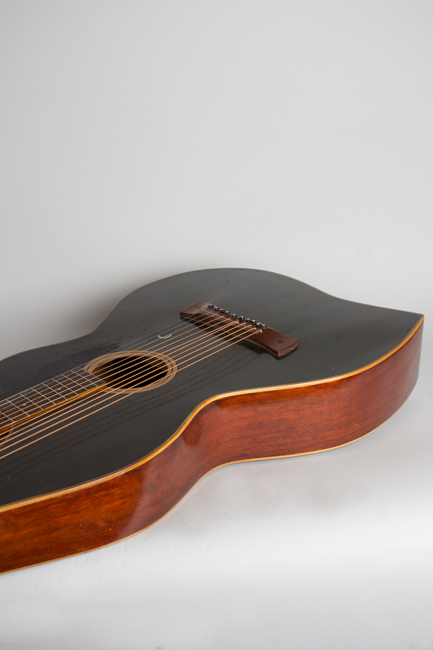 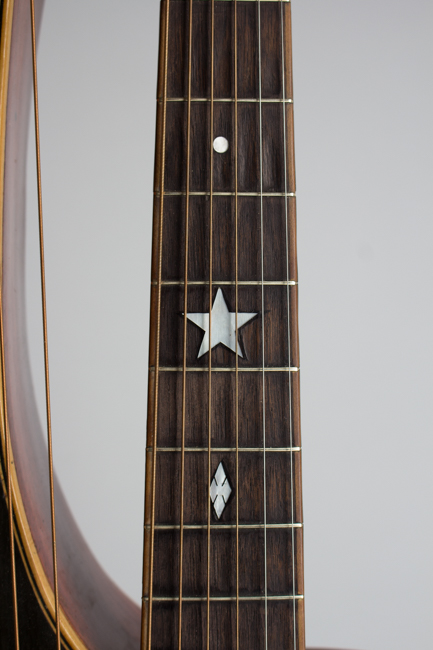 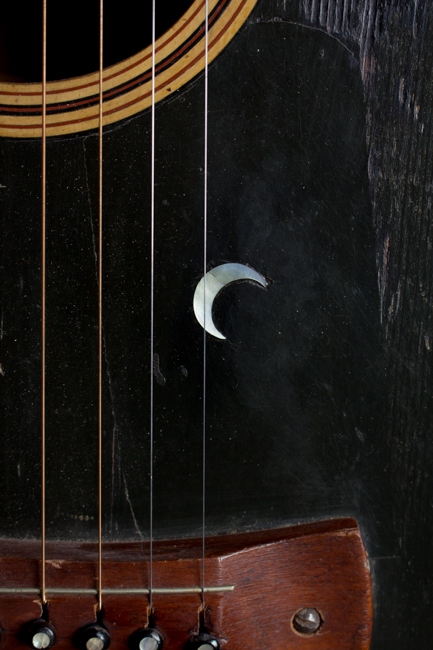 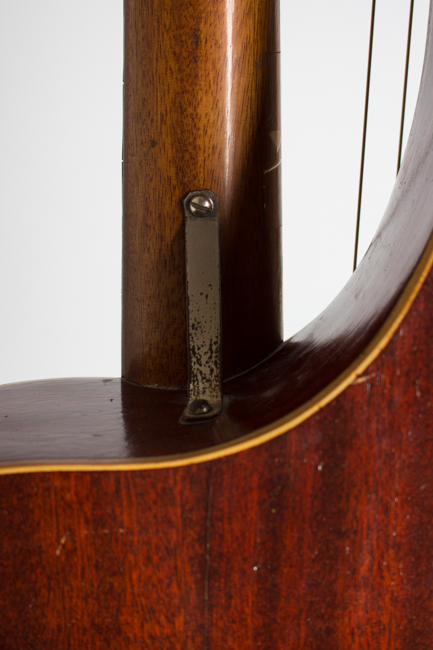 One of America's most creative (if least celebrated) 20th century luthiers was Chris Knutsen, who hand-built his always amazingly eccentric instruments on the West Coast from the 1890s up into the 1920s. His original design for a hollow-neck Hawaiian guitar was popularized by Hermann Weissenborn and his Symphony harp guitars by the Larson Brothers (under the Dyer label), but Knutsen himself never made the leap from craftsman to manufacturer. He tinkered endlessly with his unique and highly original stringed instrument concepts, and each completely handmade instrument is distinctive, often appearing to be built from found woods and whatever hardware was available.

This exceptionally large-bodied Harp guitar dates to around 1912, towards the end of his fascination with harp guitars, and is a wonderful example of Knutsen's best work. The lines are fluid to the point of abstract shape; even the headstocks are nonconventional with a liquid sculpture look. The unusually large body has typical signature Knutsen features, including a lower body extension and a bank of 5 sub-bass strings mounted on a sweeping hollow upper-body extension.

The bridge is a massive abstract carved affair, with the lowest play string and the adjacent harp string sharing a pin hole. The top is triple-bound in wood, and the fingerboard is side-bound the same way. The sound hole has multiple wooden rings and there is a small discreet pickguard set into the top, decorated with a pearl crescent moon inlay.

The wood-bound fingerboard is inlaid in a rather random pattern of shaped pearl pieces, including a large star, slotted diamonds, and dots. The neck has a radical taper as it moves to the body, so while the nut width is a narrow 1 5/8" (very unusual for the time), the fingerboard width over the body joint is 2 1/4". The profile is a shallow "C," which is very unusual for a guitar from the 1910s. The tuners on both headstocks have a typically Knutsen random air about the mounting pattern, and there are two separate metal brackets joining the headstocks front and back secured with large wood screws.

This body of this guitar at over 18" wide is the largest Knutsen instrument we have seen. The internal workmanship is cleaner and better executed than many of this maker's surviving creations, some of which have braces that appear to be random wood leftovers. Despite over 100 years of tension, the top remains solid with just a bit of arching around the bridge. Knutsen's elaborate original label which states "sole patentee of the 11-string harp guitar" and helpfully gives the proper sub-bass tuning is still completely intact.

While obviously a supremely eccentric guitar, this is a good-playing and excellent-sounding piece of American musical art, one of the most striking and best-made of Knutsen's creations. By any standards this enormous harp-guitar is a stand-alone piece, a testament to its maker's singular visions of fretted glory and as unique as they come.

This instrument remains in very playable condition, which considering its age and the sometimes quixotic methods of its maker is no mean feat. This spectacularly rare guitar shows both general age and play wear but no major damage over 100+ years. There are several well-repaired grain cracks to the top and back but overall the guitar remains internally and externally very original, with some evidence of moderately heavy play long ago. The top is not perfectly flat but is stable and all braces are solid (and sizable, in some cases!). There is wear to the top below the fingerboard that has been touched up with dark pigment but not oversprayed.

The original carved rosewood bridge has been reglued, probably more than once but there is only light touch-up around the edges. It is secured by several large wood screws; this is as Chris Knutsen built it. The back of the neck has some old long scrapes that look to have been caused by a primitive capo long ago. The fingerboard shows some divoting in the first position, but the frets (which are very narrow wire and appear original) remain in very good condition with only light wear. This is easily the best-sounding Knutsen we have had, with a very powerful bass response on the harp strings without losing clarity up the neck. Includes (amazingly!) the original case, which is essentially an oversized piece of pasteboard luggage. Very Good + Condition.
×